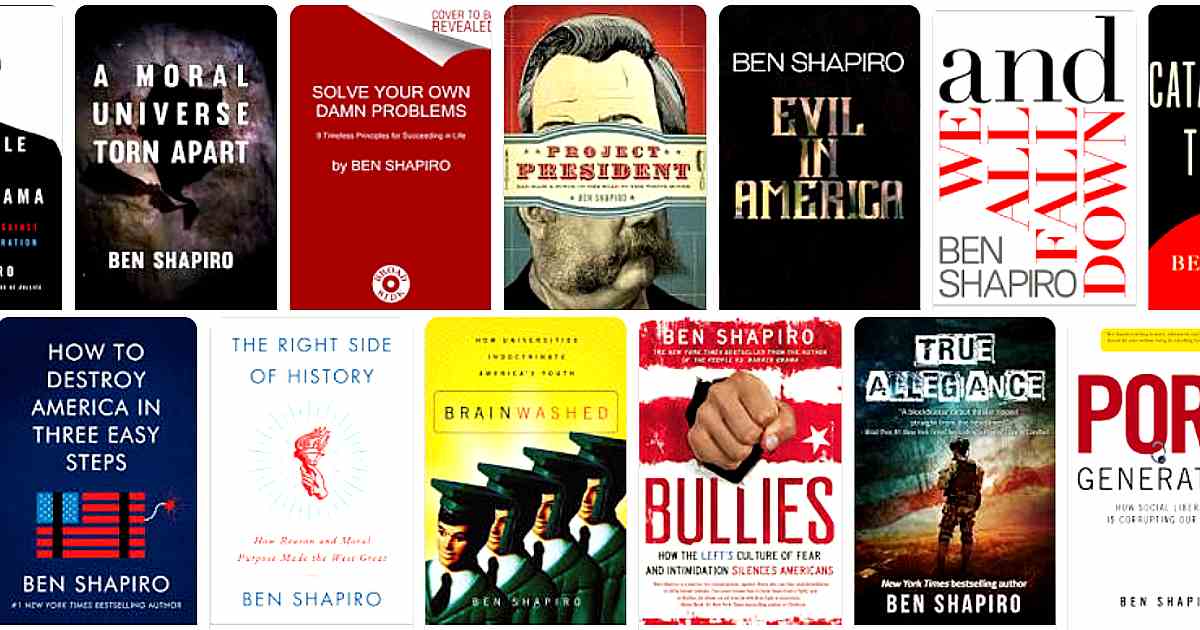 Ben Shapiro books consistently reach the number one spot on Amazon’s best-seller lists. And that’s no surprise: Shapiro, a graduate of Harvard Law School, is “editor emeritus” of The Daily Wire, a conservative news organization that he founded.

He became a nationally syndicated columnist at the tender age of 17, and since then has written more than a dozen books on a wide range of political topics.

See our list of Ben Shapiro books below, and take a look at what this former editor-at-large of Breitbart News has to say about the sundry maladies our nation currently faces.

Looking for the latest headlines? Click for news from the top conservative websites.

The Authoritarian Moment: How the Left Weaponized America’s Institutions Against Dissent

“Ben Shapiro asks how far Americans are actually willing to go in forcing each other to fall in line.”

Facts (Still) Don’t Care About Your Feelings: The Brutally Honest Sequel to the National Smash Hit

“In this curated sequel to Facts Don’t Care About Your Feelings, Shapiro breaks down American politics from 2015 to today like you’ve never seen before.”

How to Destroy America in Three Easy Steps

“A growing number of Americans want to tear down what it’s taken us 250 years to build—and they’ll start by canceling our shared history, ideals, and culture.”

“2019 was the year of the “wokescolds” and the “woke inquisitors” — the new representatives of moral panic in America … Read all about this systemic political pandering, and the prognosis for our country’s culture, in this collection of bestselling author Ben Shapiro’s 2019 syndicated columns.”

Facts Don’t Care about Your Feelings

A collection of columns written by between 2016 and 2019, which highlight “Donald Trump’s campaign, election and presidency. The book is divided into 10 chapters that run the gamut from religion to government to the First Amendment and other compelling issues readers on either side of the political aisle will enjoy.”

“Democrats are pulling out all their stops to defeat President Trump and Republicans, and now they’re getting desperate … Read all about the acts under the big top in this collection of [Shapiro’s] 2018 syndicated columns.”

The Right Side of History: How Reason and Moral Purpose Made the West Great

“Human beings have never had it better than we have it now in the West. So why are we on the verge of throwing it all away?”

“This collection of Shapiro’s 2017 syndicated columns paints a picture of the current American landscape.”

And We All Fall Down

“Over the last few years, culture has swum upstream of politics; social liberalism has deteriorated the American future; and the meaning of the conservative movement has been put up for grabs. Provocative radio host Ben Shapiro is the “principled gladiator” who’s militantly defending conservative ideas amid this chaos.”

The Establishment Is Dead: The Rise and Election of Donald Trump

“In his latest column collection, controversial conservative radio host Ben Shapiro breaks down the Trump phenomenon and its implications on the political establishment and conservativism.”

“In this collection of his nationally syndicated columns from 2015, Ben Shapiro sheds light on the distortions of reality plaguing America.”

This “breakneck thriller asks how close are we to our country’s collapse—and will we be able to stop it once it begins?”

“Ben Shapiro discusses hot-button political and social issues of the day. He calls attention to the corruption of the American future due to social liberalism. This is a collection of his nationally syndicated columns from 2014.”

“Ben Shapiro is a nationally syndicated opinion columnist for Creators Syndicate. This is a collection of the very best of Ben Shapiro from 2014.”

The People Vs. Barack Obama: The Criminal Case Against the Obama Administration

“… a comprehensive case against Barack Obama’s abuses of power during his time in office.”

How to Debate Leftists and Destroy Them: 11 Rules for Winning the Argument

“The problem, as Ben Shapiro puts it in this must-read, is that “because conservatives don’t think about how to win that they constantly lose” in confrontations with leftists. The solution is to stop taking the bullying and learning to argue for victory.”

Bullies: How the Left’s Culture of Fear and Intimidation Silences Americans

“Ben Shapiro shows once and for all that the left is the single greatest source of bullying in modern American life. Their goal: to shut down the political debate in the name of political correctness.”

Primetime Propaganda: The True Hollywood Story of How the Left Took Over Your TV

“An essential exposé of corrupting media bias, pulling back the curtain on widespread and unrepentant abuses of the Hollywood entertainment industry.”

Project President: Bad Hair and Botox on the Road to the White House

“Project President tells the story of America’s love affair with presidential looks and appearance, why that often matters more than a politico’s positions on the issues, and what might well be coming next.”

“With an arch wit and insider’s perspective, Shapiro exposes how liberal groupthink has spread bacteria-like through our education system and is threatening to squash genuine debate in our schools.”